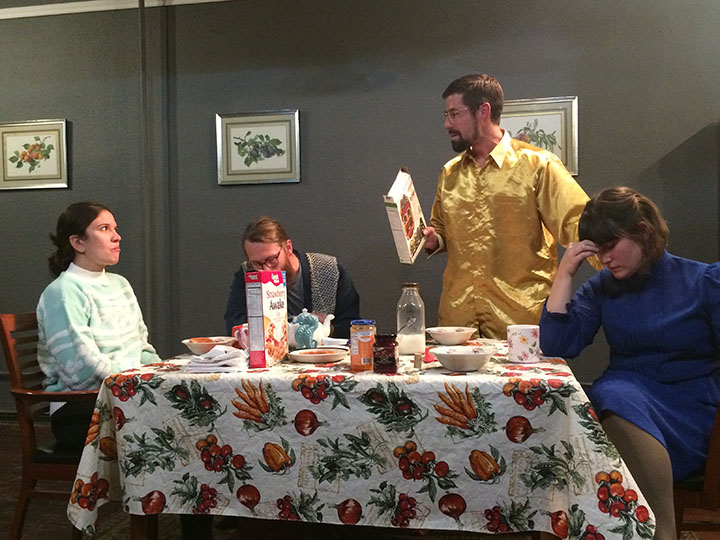 The Phantom Tollbooth by Norton Juster:
The Phantom Tollbooth is the story of a bored young boy named Milo who unexpectedly receives a magic tollbooth that transports him to the Kingdom of Wisdom, once a prosperous but now troubled place because two kings are fighting over which is more important — math or literacy. Milo acquires two faithful companions and goes on a quest to find the two exiled princesses, Rhyme and Reason, so that he can restore balance to the kingdom. In the process, he learns valuable lessons and finds a love of learning.

3600 is an audience interactive show written, directed and performed by 5 actors from The Three Leaches Theatre Company. With 60 minutes counting down, the performers will thrill audiences with 20 different scenes ranging from improv to the abstract and the absurd with a dash of comedy and drama! The catch? The audience will choose the order of the scenes each night so the actors don’t know what to expect! Will they finish all scenes in time? Come find out!

Ludlow Fair and Home Free! By Lanford Wilson:
(These two very different one-acts will be done in one evening together).

Ludlow Fair is a story about two girl roommates. Rachael is glamorous, fast-living, sometimes lost in her own self-dramatizations; Agnes is plain, matter-of-fact, her shyness masked by a kooky personality. The play is ostensibly about Rachael: She turned her latest boyfriend in to the police when he stole from her, and now she is remorseful—now she decides she is in love with him. Agnes tries to cheer her up with wisecracks, then tries to rekindle her self-awareness, and finally Rachael goes to sleep. Agnes is left alone, thinking about her lunch date with the boss’ disappointing son tomorrow. And suddenly it is her play, the realist is the true romantic.

Home Free! is a beautiful drama about a brother and sister who have shut themselves off from the outside world, instead creating a joyful world with two imaginary children within the walls of their apartment. Unfortunately, Joanna’s pregnancy forces them to face the outside world — something Lawrence is not ready to do.

Musical Review:
We will be singing and dancing the night away with our Musical Review! Come join us for a fun evening of well-known musical songs.

How I Learned to Drive by Paula Vogel:
This story follows the strained, sexual relationship between Li’l Bit and her aunt’s husband, Uncle Peck, from her pre-adolescence through her teenage years into college and beyond. Using the metaphor of driving and the issues of pedophilia, incest, and misogyny, the play explores the ideas of control and manipulation.